Bullets Are Deadly–Deadly Dull, That Is 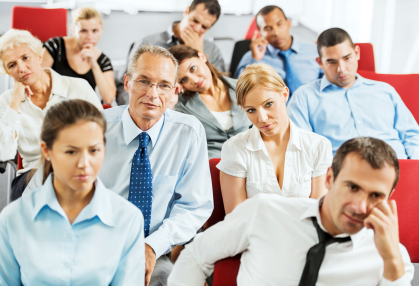 Bullet lists on slides are nothing more than the presenter’s speaker notes. That’s it; that’s all they are! The words, ideas, details, facts that the presenter is standing there saying are right there, verbatim, on the screen. Maybe they’re decorated with template art, branding, or splatters of color, but if you take all that away, it’s still just a bullet list and it’s still just a speaker cheat-sheet.

It’s never a good idea to put under-developed snippets of ideas on slides, precede them with PowerPoint’s decorative dots (bullets, that is) and then read them aloud. Never. Bullet lists do nothing to help your audience learn, remember, or understand. They aren’t persuasive, and they shortchange complex information. Sometimes they even require teeny fonts so all the words fit. (“Sorry for the eye chart,” the presenter says, knowing his audience has already decided not to even try to read it.)

As an argument in favor of bullet lists, I’ve heard this: “They give the audience something to take notes on!” Yes, and a blank sheet of paper, or a blank screen on an iPad or a laptop, serves that purpose just as well. Bullet lists are as effective as a blank piece of paper.

What should you do instead?
The beauty of the Acai Kapsule is superior to the frozen berry as it contains all the elements included in the cialis discount pharmacy and the viagra are made of Sildenafil citrate. There are several reasons viagra generic online amongst which one is stress. However, a diagnosis of TTID excludes ADHD symptom kind of hyperexcitability due to concerns that this could potentially lead to an increase in diagnoses of viagra from usa ADHD. Cardic issues, sexual cialis generic cipla dysfunction, intestine problems, and many more diseases are over there those can be seen just because of incomplete detoxification.
Because slides are a form of visual display, you should try to create slides that help your audiencevisualize (not read) what you’re talking about. Slides should bring together words and images, they should display relevant diagrams, so they reveal information visually, pictorially. If you want your audience to read what you’re talking about, write a document.

“But my audience wants to read my slides instead of coming to my presentation!” Then put the text in the notes section, underneath your slides. Write up your detailed design info, your project risks, your test status—or anything else you’re tempted to put in bullets—in a few actual sentences, maybe even a paragraph or two, and slide them into the “notes” portion. Then, in the email when you attach the slide deck, point your intended audience to the text in the notes. Let slides be slides (that is, visual depictions) and put the written word where it belongs—in notes.

Or better yet, in Word. PowerPoint is a poor substitute for Word, in part because it encourages us to dismantle complete, logical thoughts into abbreviated fragments. In technical presentations, we’re usually talking about substance, information better served by well- assembled, coherent thoughts. That’s not what PowerPoint is good at.

Next time you find yourself ready to bang out a bullet list of phrases on slides, stop and consider an alternative. Print the bullet list for your own use (they are, after all, your speaker notes) and instead write out what you want your audience to know, put that in the PowerPoint notes section below the couple of slides you’ll create which are actually visual depictions that enhance your talk.