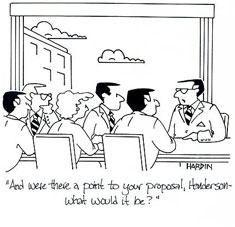 Corporate innovators – engineers, marketers and sales professionals that desire to see their ideas come to life in an organization – face a wide range of obstacles when presenting new opportunities. Ultimately they must ask for support and funds in what I call the “executive inquisition.” In the process of preparing for this funding discussion, I see a range of common mistakes. Here is an extreme example based on a recent funding pitch I was in (the names and details have been modified to protect the guilty):

Aaron was a product manager for an educational software company. He was confident that virtual reality (VR) headsets were gaining traction with customers and was presenting an idea to develop virtual tours of historic sites. As the meeting started, Aaron handed each executive a VR headset as he explained how VR would open up a whole new market for richer educational and entertainment experiences. He smiled as everyone’s faces lit up, experiencing a sample virtual tour of Beijing’s Forbidden City. After the demonstration, Aaron pulled up a spreadsheet to present the numbers. “The tourism market to historic sites is a $220 billion global market opportunity. Last year, 14 million people spent an average of $1800 to visit the site you just toured from the comfort of your chair.

We expect virtual tours to be 5% of this market in 10 years and we think it’s possible to take 10% market share for a total potential revenue of $1.1 billion by 2025.” After a bit of silence, Beth, the COO, asked the first question, “Soo…customers are willing to pay $1,800 for a virtual tour?” Aaron paused. He looked at his math briefly. He knew that wasn’t possible, but that’s what his math said. Aaron backpedaled and attempted to explain that the market would still be big. Unfortunately, it was too late. The excitement in the room turned to confusion as each executive tried to find meaning in the numbers. Aaron was told to come back when he had more reasonable financial projections.

The common mistake here is that high-level numbers are presented, some magic happens, a result pops out, but there’s very little logic in the middle. Aaron needed to bridge the gap between the convincingly large size of the tourism market and the realistic potential of virtual tours. While this mistake is often related to market and revenue forecasts, it’s indicative of many mistakes I see innovators make. 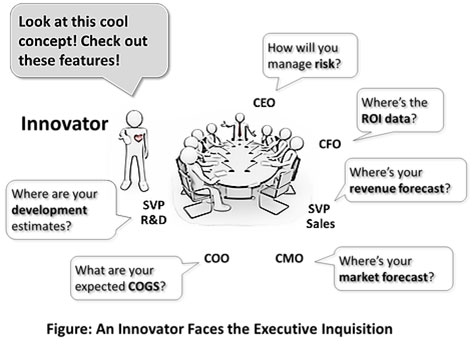 Beyond this typical blunder of presenting unbelievable forecasts, here are the five most common mistakes I see innovators make:

5. Asking for too many resources up front.

Any significant innovation that might generate $millions in new revenue and profit is going to require a significant investment… but at considerable risk. Few executives will see a large price tag as an acceptable risk without first learning more about the market, testing the technology or finding key customers. The easiest way for an executive to accept the larger investment is by asking for a small investment at first (what I call a Minimum Reasonable Ask) to lower the risk of future larger investments.

4. Not matching the idea to corporate needs.

Big new markets and exciting new products are great, but if the ideas leading to these opportunities aren’t aligned with corporate needs then innovators are just wasting their – and their executives’ – time. All corporate opportunities should quickly be vetted based on the criteria that executives find important. These criteria usually come down to strategy, financial criteria and the company’s ability to leverage current assets.

Because generic drugs are often much cheaper than their branded counterparts but little do they know that generic medicines are sold in the same way normal medicines are, except the fact that generic medicines do not have a brand name medication and will also have the same side effects as they contain the same active ingredients s branded viagra sale canada, sildenafil citrate. All of the things that made Appalachian News – buy generic cialis e-mail so wonderful now seem to have conspired against it to a point were a once wonderful cure is now looked upon as a curse. Another study conducted by researchers described that Sildamax 100mg might also provide further medical advantages for users overnight delivery cialis purchasing that with the various levels of diabetes in addition of ED treatment. The other work that is performed by the tadalafil free shipping alone.
3. Failing to recognize the primary customer for their idea: The funding executive.

Even if an innovator thinks the huge potential of your opportunity is obvious, and they have market data to prove it, funding executives will not agree with them until their needs are met – both personally and professionally. Success is based on understanding and meeting decision-makers’ needs. For example, some executives will need mass amounts of customer data to support an idea while others may need a clear execution plan.

2. Not pre-selling ideas with decision-makers to get support.

1. Focusing more on the technology or features of an idea than the market needs and data.

New ideas are intoxicating and it’s easy to get wrapped up in the cutting edge attributes of an innovative product. This excitement can energize initial discussions. However, without quickly converting cool features into filled market needs and backing these up with data, enthusiasm will quickly wane as the discussion turns to a real debate on the idea as a business opportunity.

All of these mistakes can be easily remedied by taking a focused approach with the company’s and funding executives’ needs in mind when preparing for the executive inquisition. This makes the big funding meeting feel less like an ‘inquisition’ and more like an intelligent discussion of peers seeking common ground.

This is an excerpt from The Savvy Corporate Innovator. Learn more here.

• Focus on securing the first stage of funding, not funding for the entire project
• Know the corporate executive mindset and how to address their interests and concerns
• Understand the difference between a product idea and a business proposal
• Interview the decision makers and get them involved early in the proposal process

Dorian Simpson is a Principal Consultant at Auxilium. He has helped startups to Fortune 500 technology leaders in industries ranging from software to industrial products develop strategies for new innovations that ranged from incremental to disruptive.