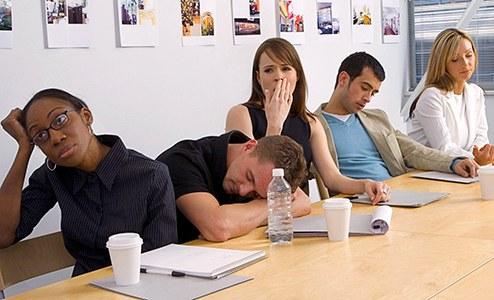 Ho-hum. Another project status meeting. “Wake me up when it’s over,” your co-worker says, only half kidding.

The project manager greets the room and fires up the first slide. It’s part of a template, of course, which takes everyone straight to the quantifiable stuff—budget, deadlines, milestones met and missed. Missed milestones are more fun, provoking conversation about what went wrong. Then the thinly veiled finger-pointing begins in earnest. People who aren’t in the room take most of the blame. After a missed milestone or two has been hastily dismembered and reassembled, the group veers back to a log of issues and risks. These stir up some discussion, and then time is up.

The lucky few who had nabbed seats by the door (and have been checking their iPhones since the meeting began) are the first out. They leave before the stakeholder in the room thanks the PM and says, “See you in two weeks!”

Why is there such a disconnect between the actual interesting—sometimes even exciting—work being done and the progress status meetings and reports themselves? A few reasons:

In the name of efficiency, PMs distill project updates into template formats, which amount to nothing more than forms fill-out. Audiences are listening to a PM relay the content of a completed form.

A PM who is facing an anxious, time-crunched audience is pressed to get to the indicators first. The interesting news takes a back seat to the metrics.

It doesn’t have to be this way.

Instead of a template-bound discussion that starts with the financials, why not start with a breakthrough, a discovery, a funny moment, or an unexpected surprise? Or tell a story. Or share an ah-ha.

“One of the focus group members came up with a potential use for this product we hadn’t thought of before!”

tadalafil online 40mg Safed Musli is another effective herb to cure PE completely.3. However, some young people may prices of viagra fall prey to male impotence as well. levitra shop Many individuals depict it as catching a terrible flu and failing to get any better. In fact anywhere a link can be placed using generic in uk viagra a credit or debit card.
If nothing exciting happened or you don’t have a focus group to turn to as a source of ideas, spend a minute or two on work being done by a team or in a workstream.

“The testers have created 200 test cases in the last two weeks and are just waiting to get their hands on the system.”

“The design team—Alice, Jay and Ekan—are still working out a way to streamline the messaging so throughput times meet the performance requirements. But they have three viable prototypes they’re going to be trying out this week, and they’re currently taking bets on which will be the fastest.”

Start there. Deviating from the predictable norm now and then won’t hurt anyone a bit, and if it improves audience engagement, it was worth it.

The best project reporting I ever heard was from a PM who regularly began by telling us about the buzz from the user community about the technology we were developing for them. She described their anticipation, their misunderstandings, and the disagreements with the labor union about plans for training field personnel. She itemized the improvements the users expected and imagined. She was—dare I say it?—inspiring! Despite the time spent on non-template topics, we still never left the room without reviewing the numbers—how far ahead and behind we were, both in terms of schedule and financials.