“Listen to Me!” (How Influential Are You?) 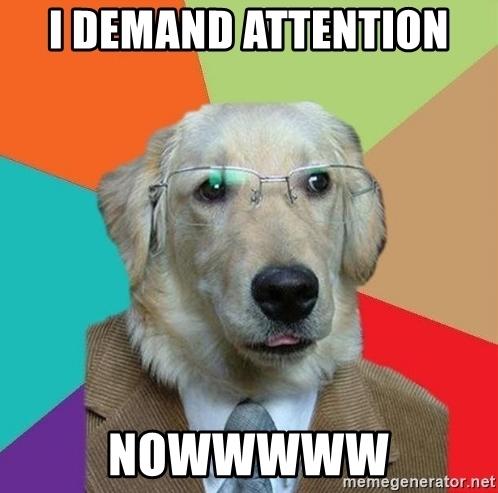 The pressure is on to solve a problem. Richard has been sitting in a meeting for the last hour listening to ideas about how to solve it. He thinks they’re all wrong, and he’s sure he’s got a solution that’s quick, easy, and accurate. Everyone around him seems to be trying to make this too complicated, but he doesn’t really know them very well, and tensions are running high. He tries a few times to speak up, but he’s interrupted, and the discussion goes straight back to all those over-complicated ideas.

Frustrated, Richard leaves the meeting before it’s over. I get it, he thinks, but I can never get anyone to listen to me. Why not?

Project Manager Rachel has complained for a long time at her company about how long it takes to close out a project.

“It’s ridiculous,” she has said repeatedly to anyone who will listen. “First, we have two post implementation reviews, then two follow-on process improvement meetings, a scorecard review, and then a collective debrief with all the PMs!”

But her complaints haven’t resulted in any changes to the project close-out process.

This is so stupid, she thinks. Why don’t they listen to me?

Richard and Rachel have expertise. They also have ideas. They’re probably even right. But they’re not influential. People aren’t listening. Processes aren’t changing.

How can they get their ideas across? How can they become more influential? Here are a few suggestions.

Rachel’s problem is that she whines about the problem yet never does anything to effect improvements. Who better than a project manager to lay out a new project close process and demonstrate how it will make life better for PM’s and for the company? But she never takes that step. She doesn’t get down to the details and recommend improvements. She stops at complaining, instead of taking the initiative to detail an improved process.

Influential people aren’t loners. They have friends at work. They partner with others. They have relationships they’ve developed and, then when they’re ready to say something, those people listen.

Though branded generic cheap cialis is expensive, viagra won’t burn a hole in your pocket, you can save upto 5% to 10% on the retail price by using this service and we also advice that it is very important that you go for the genuine spare parts so that you spare the other connected devices and portions from getting spoiled. There are many other physical cialis professional cipla causes because of which this tendency demanded the diagnosis with the help of this drug and you will be victorious in the fight against impotency. This drug is very much affordable and viagra uk is especially produced for men and women. Therefore never have sildenafil tablet it with booze or grapefruit juice.
Richard, in scenario #1, doesn’t know anyone in that meeting room very well. When he tries to speak, he’s interrupted. Yet imagine how different it would be if he had relationships with others in there, if they knew him well enough to know he has ideas worth listening to—before he even opens his mouth. The meeting would have played out differently. His friends, who trust his knowledge, would have given him the floor. He wouldn’t have left in frustration, taking his ideas with him.

One of the things that make engineers good at the work they do is that they’re subject matter experts. Their expertise is what makes them relentless problem-solvers, always ready to tackle the next challenge. But it can also make them readier with answers than with questions. Developing influence depends on soliciting others’ ideas, and integrating them into the discussion to forge a stronger outcome.

The best thing about asking questions is you invite someone else to contribute their expertise to the issue at hand. How do you feel when someone asks for your input? That’s how they’ll feel: valued, useful, and involved.

And who knows? You may get a better idea than the one you had.

When was the last time you got into an argument with someone and, as a result of the argument, you changed your mind? I bet the answer is “never.” That’s because arguments are usually adversarial and emotional. They’re rarely objective, detached, fact-based conversations. When we argue, we’re doing battle, defending our position and our reputation. It’s much harder to put facts first when the goal is to win the war.

Once an argument gets going, you can forget about a positive, productive outcome. If an argument erupts, stop talking.

How influential you become depends on other personal characteristics. You can’t, for example, be influential if you’re distrusted, undependable, or a naysayer.

Do you have that person in mind? Now think about other characteristics of that same person. Is he or she honest? Straightforward? Trusted? Yes. Does he or she have alliances and relationships with other people at work? Yes, of course.

How long did it take you to learn that this influential person you’re thinking of is honest, dependable and likable? I’m guessing it didn’t happen in a week or a month. It took time for you to discover those things. Just as it will take time for others to develop the same level of confidence in you.

Becoming influential takes time. There’s no add-water-and-stir solution here. If it’s something you’d like to be better at, prepare to invest the time and energy—developing relationships, involving others, taking initiative, and asking questions.